skip to main | skip to sidebar

back to queens servin tha fiends

my fave releases thus far in 09 (in alphabetical order as opposed to any sorta rating)
Across Tundras - Herds of the Fathomless Valleys
The Appleseed Cast - Sagamatha
Cold Cave-Love Comes Close
Eat Skull - Wild and Inside
The Hunches - Exit Dreams
Kitchen's Floor - Loneliness is a Dirty Mattress
The Pains of Being Pure at Heart - The Pains of Being Pure at Heart
A Place to Bury Strangers- Exploding Head (advance)
Silk Flowers - Silk Flowers
Thee Oh Sees - Help
Honorable mentions:
Dan Deacon-Bromst; Ganglians-Monster Head Room; Kurt Vile-God is Saying This to You: Junior Boys-Begone Dull Care; Ducktails-Ducktails; Gary War-Horrible' Paradise; Nobunny-Raw Romance; Eleventh He Reaches London-Hollow Be My Name
Gordy
Posted by Negative Gordy at 1:45 AM 1 comment:

Our issue one pin up boy would rock a mix like this at his digs if we were to have drinks there for shiz, he's a suave mother fucker, he is indie rock, he's an ill mother fucker.....

7. Minus the Bear - Get Me Naked 2: Electric Boogaloo

23. Of Montreal - The Parties Crashing Us

i added a couple of my own tracks to mix it up cuz i would if i was drinking at this bangin party....

Another week, another meticulously chosen selection of tunes for a Negative Guest List mixtape. This one is dedicated to the ladies in our lives.

Posted by brendon at 1:50 AM No comments: 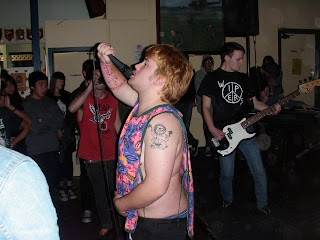 I've had these tunes for a while on my computer, and regularly listen to them on my iPod when I'm out on the field sandblasting, driving the forklift, and lugging around paint tins for the old man. There's four of them on this EP, each a great slice of creem'd electric eel as performed by some Aussie blokes and a couple Aussie girls, hot out in the sun with fluoro orange sunblock on. 'Malaria' is a wild bacteria ridden specimen, with vocalist Marcus yodelling incoherently over a slippery White Light/White Heat guitar line. 'Cosmic Man' is a synthy number reminiscent of SF's Crime playing on the set of Kingswood Country...IN SPACE.

here's a bunch of tunes that work well with the negative guest list and a bunch of
Posted by Negative Gordy at 4:00 AM 1 comment:

Here's the first Negative Guest List Mix Tape. This one was comped by me this morning.
It is GREAT.
With each new issue of the magazine I'll be interchanging between one of these and a new "Songs of Negativity" CDr.. We want to trade these for your mix tapes! Join the NGL tape trading club, 2009. Email dirtyalley@msn.com for details.

FORGOTTEN CLASSICS "Ixnay on the Hombre"

anyone with a piece of italian pizza loaf in their hand....

The Wire season 3 is definitely the best yet.
Visceral, violent.. SEXY.
McNulty struggles with himself.
Omar and Barksdale go all out on each other.
Brendon Annesley watches and thoroughly enjoys each episode.
"You harder to get at then my fat wife's cunt, nigga".
Posted by brendon at 2:32 AM No comments:

My buddy graced the cover of our debut issue of NEGATIVE GUEST LIST. It took about a month after the release of the zine for him to finally hear about his ugly mug being plastered on the cover of the damn thing and we were holding our breath the whole fuckin time waiting for the tirade that was bound to aftermath. The bastard loved it. He basked in the fuckin glory of it all and decided that we should put him on the cover of all the issues. Fuck that i told him but if he wants fame he can have it on our blog. So this is for you tommy, some more fucked up photos for our loyal readers to laugh at... or whatever. Expect more photos of the man as the drug fueled fiesta continues.... This mother fucker belongs in VICE MAG (no offense tk)

all is quiet on the western front

swell maps – a trip to marineville

the afflicted man – get stoned ezy

Posted by brendon at 9:54 PM No comments:

In 2007 I did a hardcore fanzine called DA/DM.
I embellshitted my personality and called myself "Amphetamine Addiction". He was an 18 year old anorexic runaway, returned home w/ a taste for weird noise and R. Meltzer. At least half of the writing were pure teenage fantasy, and at least half the writing is ridiculous ("...I was arched into misshapen hemitry, a shadow cast in a dank room, rocking and moaning in a sick broth of disease and outward depression...cosmically electrocuted" et al). The aim of this zine was to destroy people's heads when they read it, being packed so thoroughly with large, weird words and paragraph long sentences that it was an actual effort to read. It bummed some people out.
Tonight I found 30 some copies of this mag in my room. I am selling them for $2 each post paid.
AMPHETAMINE ADDICTION will return in issue #4 of NEGATIVE GUEST LIST, interviewing the Noisy NY hardcore act, NO FUCKER.
He will join a roster of talented writers that has now grown to include; Rhys Davies, Monty Buckles, Fleece Reynolds, Sam Vince and more.
Posted by brendon at 4:30 AM No comments:

I have posted this exact message on several respected music message boards, as a promotional device for the upcoming issue of THE NEGATIVE GUEST LIST. I have left it in all small-caps so as to not alter the intended effect.
attention noise rock enthusiasts: issue #2 will be out in 5 days.

it has interviews with: stick men with rayguns, the ooga boogas, naked on the vague and ratas del vaticano. the ratas interview is amazing, watch as ngl shamelessly capitalize on the burgeoning "spanish punk" internet movement.

clockcleaner are officially eulogized in this issue. pay your respects to a great hard rock band and BUY THIS MAGAZINE.

the back cover is blank, and i'm going to get noted local artists and homeless people to draw all over them. no two cover's will be the same.

ps; we will have copies at the upcoming straightjacket nation and uv race shows. try before you buy.
Posted by brendon at 2:23 AM No comments:

THE NEGATIVE GUEST LIST is the greatest magazine in the world, and so it's only fair that it should have a blog. Thank you for reading.
Posted by brendon at 2:20 AM No comments:

Home
Subscribe to: Posts (Atom)
I'm a cool rockin' daddy in the A.U.S.

brendon
get your motor runnin', head out on the highway.